Immunity for Cops Is The Problem 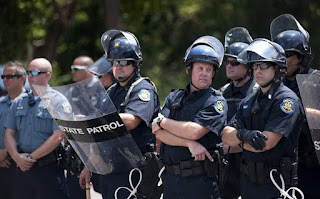 All the criticism and outright hatred form so many parts of society showered on cops just now means nothing to them. They are and will remain blind and deaf to aggrieved outsiders of any status.  There is no motivation for them to change their “us and them” attitude. None.

Cops don’t have to change because they are allowed by law to go about their jobs with virtually no fear of serious consequences regardless of how insulting, demeaning or violent their behavior.

Yes, cops can be charged with crimes just like the rest of us. With the spread of mobile phone cameras and social media, more are being held accountable for sometimes truly horrific acts, such as the deliberate murder of George Floyd in Minneapolis. Even then, they only receive a version of justice light. Floyd's murderer, Derek Chauvin, is actually eligible for a $50K annual pension when he turns 50.

But each day, cops go to work knowing that unless they are particularly stupid, they can go about the business of pushing people around, physically assaulting them and, even, ruining their lives for a couple of reasons. One is a nasty legal doctrine called qualified immunity.

Simply put, qualified immunity protects government officials acting in their assigned capacities from lawsuits unless their behavior is clearly illegal or unconstitutional. The notional concept behind this doctrine is to protect public employees from legal harassments simply for doing their jobs. In effect, it gives cops almost carte blanche to act as they will as long as they’re on the job.

Another brick in a protective wall surrounding bad cops is their unions. Organized unions go far beyond collective bargaining activities to make sure their members are treated fairly while on the job. This includes making sure members aren’t arbitrarily disciplined, including firing. Fair enough. But in the case of police unions this often means building roadblocks to even minor reforms. It also allows them to get involved in deciding who will govern police departments.

It would require a long and likely bitter fight to make changes in the areas of qualified immunity and the power of police unions. It would be wrong to eliminate all protections against unfair treatment and abuse of tort laws.

Unlike all other government employees, cops have life and death authority over everyone they meet and in all circumstances. Allowing them equally unique protections gives them the feeling of invulnerability that is too often displayed in racist and violent acts.

Posted by billbucy.blogspot.com at 3:39 PM