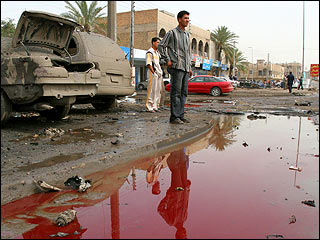 At least 75 corpses have been found in the area since Monday morning, authorities said today, most of them bound, riddled with bullets, and showing signs of torture. . . .

In addition, at least five bombs exploded in the capital area, killing at least 14 civilians and 6 policemen, and injuring 23 people.
-- The New York Times

Our commanders and diplomats on the ground believe that has not descended into a civil war.
-- President George W. Bush

Posted by billbucy.blogspot.com at 9:41 AM No comments:

Dennis Hastert in the Private Sector

Let’s say Dennis Hastert is the CEO of a $1 billlion, publicly traded corporation. He is informed that one of his most visible executives is sending “inappropriate” emails to a teenage boy.

Hastert instructs one of his aides to tell the errant executive to stop sending the emails.

Unfortunately, the bad boy exec not only doesn’t stop, but ratchets up the sexual content of the emails. Eventually, some of his missives hit the press and scandal erupts.

Hastert's knowledge of the issue also is reported. The company’s share price tumbles, employee morale plummets, and customers wonder if they want to do business with a company so poorly managed.

Hastert is asked in for a chat with the board.

: What steps did you take after the admonishment?

Hastert: I assumed that he would obey my instructions.

Chairman: You didn’t speak to him directly, follow up in any way, instruct anyone else to follow up and report back or take any other steps to resolve or monitor this potentially explosive situation.

Hastert: Obviously I was wrong.

Chairman: Yes, Dennis, you were. Please excuse us now because we have a personnel matter to discuss. Keep yourself available.

Posted by billbucy.blogspot.com at 10:19 AM No comments:

The End is Near

Starbucks Corp. on Thursday said it plans to eventually have 40,000 stores, raising its previous target by 10,000 locations.
-- The Wall Street Journal
Posted by billbucy.blogspot.com at 4:10 PM No comments:

Mark Foley and the GOP

Should we show at least a soupcon of compassion for Mark Foley, disgraced ex-congressman, proto-pederast and, he says, alcoholic? Only on one point, his agonized refusal to admit his homosexuality.

As for the GOP leadership, well, it's hypocrisy of a far more cynical sort.

Basic human compassion for Foley is qualified only because there is no information about whether he ever had sex with boys. Fringe arguments from NAMBLA aside, orientation aside, sex with adolescents is wrong and illegal.

But we shouldn't wait to condemn the House GOP leadership. It knew months ago of Foley's emails and simply brushed away his "inappropriate" writings with a "knock it off." After all, he was a solid conservative vote and a mortal lock for a seventh term.

Republicans have already lost any claim to fiscal conservatism. Now their conerstone of family values is crumbling. All that's left is their plan to bring God into government. Given their track record, the next scandal will probably involve satanic rituals in the members' cloakroom.
Posted by billbucy.blogspot.com at 5:13 PM No comments: