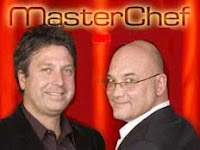 Australian Prime Minister Julia Gillard's only debate with her opponent in the upcoming election was rescheduled so it wouldn't conflict with the final of the TV show MasterChef.

“People care about who the prime minister and who the government is, but people are also pretty keen about what’s on the dinner table,” said Gillard.

The debate will be televised July 25 immediately prior to the competitive cooking show.
Posted by billbucy.blogspot.com at 7:51 PM No comments:

Ah, blood, pain and the closest shave you can get today. Yes, the old-fashioned double-edge razor and those thin, single blades.

A bit trendy just now, but it's a legitimate antidote to the insanity of five-blade "systems" with gooey strips of chemicals glued to the edge.

I switched to a long-handled Merkur razor and Feather-brand blades a few months ago. I also dropped that foamy stuff and went with King of Shaves oil with King of Shaves gel as backup for when I really slice myself into ribbons and need a bit more separation from the edge for a few days.

Yes, it takes longer and requires more concentration, but the morning ritual with a real razor  is relaxing and gives me the closest shave I've ever had.

The Wall Street Journal reports I'm not the only one swimming against the tide. One store in Manhattan says its sales of traditional shaving gear is reaching parity with the modern stuff.
Posted by billbucy.blogspot.com at 3:43 PM No comments: