A Palo Alto Kind of Curfew 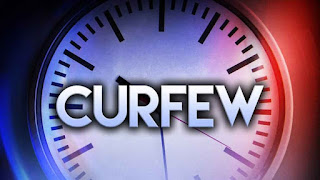 To protect our homes (median price $3.1m per Zillow) and businesses from an onslaught of rioters and looters protesting the police murder of black men, city officials have imposed a curfew from 8:30 p.m. to 5:30 a.m. This order, in effect until Friday the 13th, is entirely prospective as there have been scant protests and no violence whatsoever here marking the death of George Floyd or anyone else.

Outrage at the curfew has poured forth, particularly as expressed in the Palo Alto Weekly newspaper Town Square forum. Many residents have gone bonkers over the notion they can be charged with a misdemeanor for walking their rescue dogs before bedtime. Others are taking a higher road and claiming the city is shredding the U.S. Constitution.

Regardless of what the cops and the mayor says, and what our outraged citizenry seems to think, the curfew is designed to keep people of color out of town on the premise that they are the primary instigators of violence. Absent African-Americans on our streets during this trying time, we can feel safe is the idea. It’s sort of a 21st Century version of sundown laws.

Reading this assertion would undoubtedly raise a collective OMG! from city leaders, followed by sputtering protestations about how they enforce the law evenly regardless of a miscreant’s ethnic or racial makeup.

But the numbers back me up.

The largest number of African-Americans in the area live in East Palo Alto and represent 16 percent of that city’s population of 28,155.

Given those numbers any significant protest of Floyd’s murder would have to involve a large number of angry African-Americans from throughout the Bay Area. And that cannot sit well with the powers that be, particularly the cops.

So, Palo Alto’s leadership launched a pre-emptive curfew that will deter some protestors from visiting and give the cops an excuse to arrest even the most peaceful of those who do.

Posted by billbucy.blogspot.com at 11:20 AM