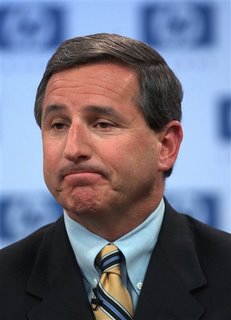 Hewlett-Packard’s image as the Goody Two-shoes of corporate American is in ruins and the company is better for it.

A couple of generations of PR and marketing savants convinced investors, the news media and company employees that Bill and Dave’s management style and ethics, forged when the company was housed in a garage, remained the foundation of the company as it morphed into an $86-billion global behemoth.

The spin rate increased as the scandal developed.

Next came denials they ordered or were aware of the nasty things done on their behalf (the Fifth Amendment of the powerful). Then they accepted ultimate responsibility using hackneyed phrases about ship captains and dollar bills. Finally, they sniffled, “I let the company down.”

Such formulaic and cynical responses demonstrated that the “HP Way” – whatever that was -- left the building long ago.

Now, Dunn says she was dismayed anyone connected with HP would employ allegedly illegal techniques. To date, she’s offered no evidence that she or anyone else referenced ethics and standards before or during the snooping. She fought like a tiger to remain on the board, probably because an unprompted resignation might indicate greater responsibility than she wanted to admit.

Hurd fumbled his response from the beginning. At first he said he was only vaguely aware of the investigation. Then he said he knew a little more than he let on initially but never read the report on the mess. That means he wants us to believe that as the CEO of an $86-billion global corporation he didn’t care much about the details of a probe into market-moving leaks from the boardroom. It's sort of a Ken Lay-lite defense.

The company’s top lawyer resigned and is invoking the Fifth. The company lawyer directly responsible for ethics resigned as has the person who supervised the investigations. HP’s chief outside counsel is hiding behind a PR blitz to position him as the eminence grise of Silicon Valley.

Somebody once or currently connected with HP likely will end up with a felony record. The legal sharks are hungry. All the senior managers and the directors are personally and properly embarrassed.

So what is good about this?

HP's true nature -- no better or worse than any other large organization -- has been revealed. No longer will it have an extra half-ounce of credibility on its side of the scales when problems or questions arise because that weight resulted from an image rather than substance. In short, it will have to work damn hard for a long time to earn the trust of its customers, employees and shareholders.

Which is what Dave and Bill did in the beginning.
Posted by billbucy.blogspot.com at 5:53 PM No comments: