Posted by billbucy.blogspot.com at 7:56 AM No comments: 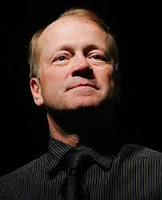 We need to get something straight about CEOs and their opinions on the U.S. economy: Their guess is no better than ours.

Most of them probably never took more than Econ 101 and 102 -- macro and micro -- and believe me those are far from the most challenging courses. I know because I got an "A" in both.

What CEOs really are talking about when they discuss the economy is how their customers plan to spend in relation to their perceptions of which way the winds will blow. So, CEOs base their opinions on what other CEOs think about what others CEOs believe and we dance in an endless spiral.

Occasionally, though, a big-time exec fesses up to the fact that's he's just guessing and I regain a smidge of confidence in how at least some companies are run. That happened today when I saw an AP interview with Cisco boss John Chambers. As he put it:

"If we were to poll [Cisco customers] I'm sure the average comes in at about 2 percent growth for the second half of the year. Doesn't mean that those customers are right, just that that's what on their mind in terms of their spending pattern. We're not making a call on the economy going down, I think the probabilities on a double dip, or whatever you want to call it, are relatively low."

Useful information offered in context and candidly. I like it.
Posted by billbucy.blogspot.com at 5:09 PM No comments: 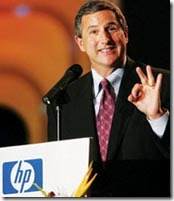 Whatever the case against former HP CEO Mark Hurd, it's crystal clear the company's board deserves none of the praise it's received for acting "decisively."

As writer Eric Jackson noted almost a year ago Hurd and his executive team have consistently gone to the company trough seeking such perks as reimbursement for such items as taxes paid on the money HP spent to feed their families in restaurants and and as much as $327,000 in personal use of a company jet. One exec, CIO Randy Mott, even got a 400 percent raise in 2008.

The attitude expressed by the greedy behavior reported by Jackson makes me wonder if Hurd's indiscreet spending amounted to no more than $20,000 as his defenders claim. And it makes me wonder if the seemingly thin claim of sexual harassment was used simply as an excuse to jettison a capable executive with sticky fingers.

Regardless, to say the board acted with dispatch to correct a problem is way off the mark.
Posted by billbucy.blogspot.com at 10:31 AM No comments: