Why We Should Vote for Donald Trump 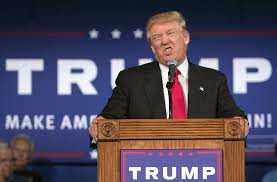 That extreme characters Donald Trump and Bernie Sanders can achieve widespread support for the presidency illuminates the depth of the American malaise. People who just a few years ago ran toward to the center to discover their leaders now race to either end of the political spectrum seeking someone to rekindle their hope. I believe a Trump presidency will ensure positive change but not because of his proffered ideas or policies.

As president, Trump will soundly alienate every conceivable political constituency. Taking him at his word, he will appoint one or more anti-abortion Supreme Court justices, thereby ensuring a woman's right to choose will disappear.

The economy? As noted before, it's time to stock up on MREs and AAA batteries.

Internationally, he'll probably kiss up to Putin and tick off Angela Merkel by commenting on her brustë. He'll scold the Chinese and the Japanese. And he just might have the cojones to ask the Mexicans to pay for his border wall.  Naturally, they will respond in kind.

Everything Donald Trump says or does will swell the ranks of disaffected Americans battered by stagnant wages, slow job growth, out-of-control cops, crumbling roads and every other factor feeding their malaise. The anger and loss of faith that fired the engines of the Trump and Sanders campaigns will spread farther and deeper. And after just a few years, a critical mass of citizens will demand real, fundamental change in how the country is governed.

That will be Trump's contribution to positive change. And we should help him build that legacy by ensuring his election in November.

Posted by billbucy.blogspot.com at 4:25 PM No comments: