Trump Will Destroy the Economy 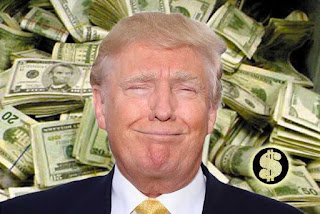 Look at a Trump presidency purely in the context of dollars and cents and tremors of fear set in.

Trump wants to slash tax rates, which, he and other believers in fairy tales, will set off an explosion of economic growth. They aver growth will flood federal coffers with money to pay for a war against ISIS as well as the estimated $400 billion to $600 billion to fulfill his pledge to deport all illegal immigrants currently in the U.S.

Unfortunately for Trump and the other myth-makers, cutting taxes achieves nothing more than lower revenue. Ronald Reagan slashed taxes and tripled the national debt.  The Bush II tax cuts racked up a $3.29 trillion deficit and stuck Barack Obama with a budget that added another $1 trillion during his first year in office.

OK. So Trump will just have to trim the bloated federal bureaucracy to even things out. Won't work. According to the Center on Budget Policy and Priorities, non-defense discretionary spending in 2015 was $585 billion, or just 15 percent of the total. Perhaps we should have a national plebiscite on which parks to close, what roads should go un-repaired, whose crop subsidies should disappear and how many border patrol agents should be laid off.

What about Trump's capitalist cronies? According to a wide range of news reports, he scares the crap out of them. The money guys can thrive in any number of environments but start to get nervous when uncertainty is the order of the day. And no one has ever tried to argue the name Trump is a synonym for stability. "From an economic an market point of view, a Trump presidency could be a disaster," Barry Randall, a tech portfolio manager for Coverstor told U.S. News. Is it any wonder that Wall Street money mavens backed Hillary with  $21.4 million by the end of 2015 to back Hillary?

Trump has already turned off much of the world and not just  because of his crassness and ridiculous hair. He has proposed a 45 percent tariff on manufactured Chinese goods. China is expected to surpass Canada as the U.S.'s largest trading partner this year. It also holds more than 7 percent of the debt incurred by tax-slashing Republicans.

Posted by billbucy.blogspot.com at 1:52 PM No comments: