Today's Food Should Be Eaten Tomorrow

I am mostly enjoying Jim Harrison's book of food essays, The Raw and the Cooked.  I modify my reaction for only a few reasons but I hold them to be important.
First, Harrison eats so much I almost get bloated turning the page. (He justifies this by claiming a uniquely active metabolism and I won't call him a liar.) Harrison also has a penchant for tossing an entire head of garlic into a pot as readily as some cooks add a pinch of salt.
What really prevents me from fully embracing his attachment to food is his insistence on eating what he cooks immediately. 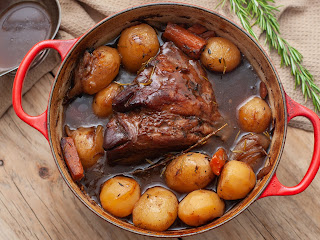 Much of what Harrison cooks and what he declares he loves to eat would benefit from being set aside for a day or two to allow the ingredients to mate and spawn new flavors. Creative stews made with game and wild herbs are nicely prepared and then dished out for dinner that evening when a bit of patience would make them so much more delicious. At times I want to drag him off to a restaurant simply so the posole can be saved for and savored tomorrow.

There are many dishes -- most of them familiar and popular -- that taste better when the ingredients hang out together for a time. Chili and lasagna insist on this. Meatloaf might takes great right out of the oven but can generate tears of gratitude when left untouched overnight. Split pea or lentil soup when cooked with a fatty ham hock? Indeed. Beef stew or pot roast braised with homemade broth. Pasta dishes involving cheeses. I even champion leftover pizza (even when eaten cold for breakfast as a hangover cure second only to menudo - which also should be left to mature after cooking.)

Really, Is there any food more appropriate to a menu featuring matured dishes than cassoulet?

I am so enamored with letting food sit before eating that I created a fantasy restaurant named Leftovers. Most of the entrees would be offered as "today" and "yesterday." Some, like pizza, would also have a cold-hot option. Potatoes baked yesterday could be turned into mashed or twice-baked delights. Dairy could be fresh as hygiene and health are sort of important.

Since many Leftovers offerings could be classified as comfort foods the clientele might trend toward homesick college freshmen and the depressed.  Still, if a customer leaves a restaurant feeling better than when she walked in, no one could deny success.

I plan to make some macaroni salad this week. A traditional (some might say banal) dish it offers a measure of creative freedom in selecting ingredients. Most important for me, though, is the fact it isn't finished until it is left in the refrigerator for hours or even a full day.

I expect to be quite pleased.

Posted by billbucy.blogspot.com at 11:14 AM

The key is cooking in sufficient quantities to guarantee leftovers. Always cook for 4-8, even though it's just the two of us.