How President Biden Will Disappoint Me

I am sure President Joe Biden will disappointment me,
likely several times in several ways. 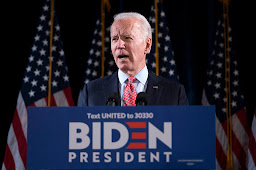 For one thing, he probably won't choose an attorney general who pledges to focus the Justice Department's considerable resources on putting Donald J. Trump and every one of his political appointees into super-max prisons.
Even with a Democrat majority in both houses of Congress, he likely won't propose a 99 percent tax on personal wealth of more than $1 billion and channel the money into a free college education for anyone who legitimately gains admission.
No way will Biden tell Vladimir Putin to kiss his Irish butt. He probably will refrain from sharing the same sentiment with MBS, Viktor Orban, Rodrigo Duterte and all the other fascist dictators making life difficult for so many people. No, I just don't see him doing that.
I really doubt his plan to fight the spread of Covid-19 will include quarantining Florida, Texas, Arizona, every college fraternity and everyone who honestly believes that laws mandating the use of face masks is part of a plot to destroy all personal freedoms.
Other Biden disappointments will probably include declining to nominate Barack Obama as secretary of state,  Tammy Duckworth as secretary of defense, and Alexander Vindman as national security advisor.
I forgive President Biden for disappointing me in these matters and the others that arise during his time in office. Giving him a pass on his mistakes is easy because I know he will make them while trying to do what is reasonable and - for the most part - good for all of us. Given recent history, that's enough for me.
Posted by billbucy.blogspot.com at 8:58 AM